This story is so egregious it is actually hard to believe! It all started when Kaylen Echols, owner of Legacy Roofing, contracted to do a roofing and paint job for homeowners, Steve and Tracy. What happened after that is simply outrageous!

Everyone, including Echols, agrees that his painter did a terrible job and even vandalized the house when the homeowners complained. Kaylen kept promising to fix the paint and vandalism but did nothing. The homeowners posted a negative review online. After that Kaylen fired back online claiming that Steve and Tracy were unhappy because Steve caught Kaylen in bed with Tracy! (By the way, Kaylen admitted later that it was all a lie.) But he let the negative posts remain online besmirching Tracy’s reputation!

Echols justified the online attack saying that he wanted to even the scales. He said “Yes, I am an eye for an eye guy.”

Here is the outrageous phone call on my radio show.

Obviously Steve and Tracy wanted nothing more to do with him. He also said he would return the $8,900 deposit they paid up front (around $4,000 of that was for the paint job and the rest was going toward the roof). He said he would pay by Friday, September 29th. But he did not pay a dime. He also lied about the situation and said he never promised a refund.

In addition he asked me to keep talking about Legacy Roofing. He claims that he got 7 new jobs as a direct result of my show. If that’s true, I feel sorry for them. Even if people do not like me, I pray they do not let your feelings get in the way of making wise decisions.

Echols even wrote an email to Steve describing the so-called affair he had with his wife, Tracy. You can see it here.

I should point out that this guy has been in trouble in the past for domestic violence, unlawful entry, sued for money and an assortment of other things. In fact, he was just picked up last night (Thursday, October 6, 2016) on some related charges to domestic violence. 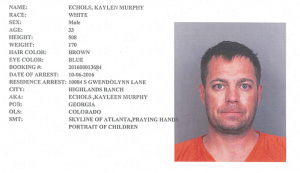 I would truly avoid this guy, Kaylen Echols and Legacy Roofing. If you are insane enough to hire him, his number is 720.690.9082.