You won’t believe the treatment Henry Gonzalez gives to his customers (based on how he treated single-mom Leslie, we believe this is his “modas operandi”). Gonzalez owns Quality Auto Body South, which by all accounts is run out of his Franktown home. He charged Leslie more than $3,500 for body work that can only be described as absolutely terrible! He charged for new parts that were not installed and the body work looked like he slapped on bondo, let it dry, then painted it with a spray can.

When Leslie complained, Gonzalez said, take it or leave it. Not only that, but he refused to release her car unless she paid cash and he decided to charge storage fees of $62.50 for each day it was there. He then proceeded to make it difficult for her to pick up her car by demanding four hours notice and then did not answer his phone! 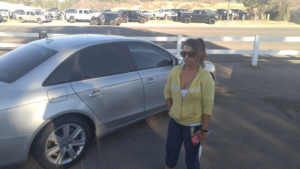 called my radio show, my co-host and chief investigator, Marc Mager personally drove out to Franktown to help her retrieve her car. Instead of trying to call him, they decided to confront Gonzalez face-to-face at his rural make-shift body-shack in the woods. Gonzalez turned over the car only after she counted out the cold hard cash in front of him. He refused to show us any of her old parts nor receipts for the new parts he supposedly bought. We have never seen bodywork this bad! From what we could see there were no new parts, dents were simply filled and sprayed and the frame didn’t look like it was touched! And this was a major t-bone collision! We highly  recommend you stay away from this clown. He is not only unskilled as a body worker but also crude and rude! To recap: He’s Henry Gonzalez at Quality Auto Body South @ 720.253.3297 OR 720.851.8888. If you see the name or numbers advertised – RUN!